The content of this website is intended as an historical record of Barnards Green Cricket Club, important parts of which are the various photographs which may be taken from time to time and displayed on the site or in the clubhouse.

IF ANY MEMBER OF THE CLUB  DOES NOT WISH PHOTOGRAPHS OF THEMSELVES OR THEIR SONS/DAUGHTERS TO BE PUBLISHED, THEN THEY SHOULD CONFIRM THIS IN WRITING TO ANY TEAM CAPTAIN OR TO THE COLTS MANAGER

The first team to declare themselves for the 6 -a - side is The Dreaded Social!

with the prospect of dry, warm weather, promises again to be a great sucess.

Teams are being finalised but there are still some places available for those who are not yet committed.

we will pass your details on. Everyone who wants a game should get a game.

This is one of The Green's major fund-raising events, important not only for our members but for

our valuable friends and sponsors so please come along and bring your friends with you.

and runs throughout the day with plenty of food being available and drinks from the bar.

Please note that any alcohol consumed on the premises must be purchased from The Club and not brought in from outside.

For a taste of the atmosphere at previous Six - a - Side days click here.

18th August 2007 - All Saturday fixtures lost to the weather.

30th July 2007 -  Congratulations to the evening league side
on their victory over Malvern Ramblers in the Tansell Cup Final. 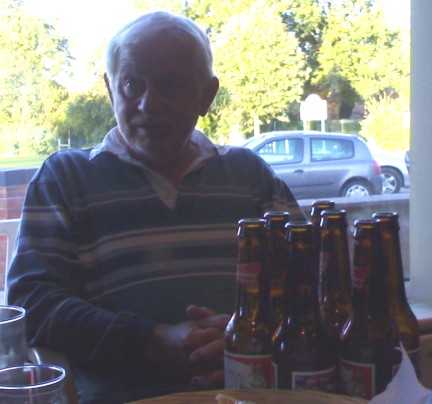 Bob celebrates The Green's victory with a quiet night in!

We now have 3 confirmed fixtures, 30 confirmed tourists and a few "possibles" as well as
a promise of glorious weather for the week of tour. All we need now is your cash. So.....
Deposit of £35.00 to Jez or Rich Brown by Sunday 22nd July please as exact numbers
have to be confirmed with the hotle on Monday 23rd July. If you missed the earlier published
tour details then click here.

Quote of the week #1

An injured Robbie Lewis - ( being attended to by opposition 'Doctor' )... "Thank you Doctor"

Quote of the week #2

Has anyone found a drinks bottle at Newland?

23rd June 2007 -  Exciting Victory at Newland.
On paper, it seemed that an under-strength 4th team were in for a tough time when they entertained
unbeaten league leaders Tenbury Wells. Being bowled out for 115 in 44 overs did not bode well.
But ......a combination of team spirit, youthful exuberance and a few mature heads saw The Green
bowl out the opposition for just 51 runs.
The 1st XI again carved out a comfortable winning draw whilst the 2nds and 3rds lost. Watch for the
full details on the reports page.

A rather damp strip awaits the visitors at Northend Lane.
Caption Competition
Send your entries HERE
Loads of entries received already... some cannot be published!

First trophy of the season...
The Green were victorious on Monday 11th June agains Stoke Prior in the Carnival Cup.
Match report and photo.

SUBS ARE NOW OVERDUE!
The last date for payment of subs at the normal rate was 31st May.
Subscriptions for those who have not yet paid are therefore increased to £60 and
those members who are fully paid up will be selected in preference to those who have not paid.

26th May 2007 - 1sts go top.
More runs for Liam Paddock (95*) and 7 wickets for Andy Ford gave us victory over Oldswinford and see
us move to the top of the second division table. Meanwhile, the 3rds gained their first win of the season at
Hanley and the 2nds and 4ths gained creditable winning draws.

19th /20th May 2007 - Another ton for Kev Golder (112*) and five wickets from Andy Ford gave the 1sts
a convincing win over  Belbroughton which leaves us just 3 points behind leaders Lye. With no league
matches this Sunday, Marek's Marrauders have a friendly at Northend Lane and will be glad of your support.

12th May 2007 - Congratulations to Chris Smedley (4-27)and Tim Williams (5-58) who were in the wickets again as
the firsts overcame Netherton. The weather washed out the other fixtures for The Green.

A great start to the season saw wins for the firsts and seconds against Wormelow and Monmouth with
early season centuries for Mettie and Kev Golder, Liam Paddock and Dave Knapper. Following on from
an evening league victory over Ramblers this raised expectations and sprits for the coming weeks.
5th May saw victories for three of our Saturday teams. So, lots of great cricket in prospect over the
coming months. Details of all of the fixtures, results and match reports will be available on the website,
Try to get along and support one of the teams and remember that if you have any photos or anything
else you would like to share then please send them to us at the usual address.

COLTS NETS ARE UNDER WAY!
Age groups Under 14s, 15s and 16s will train on Tuesday nights from 24th April 2007.
Younger Colts, up to and including Under 13s will train on Wednesday nights from 25th April.
As the number of young players joining the club continues to grow, any assistance that
senior members or parents can give on Wednesday evenings will be much appreciated.
Remember that all colts need to register as members of The Green and parents can assist
by downloading a registration form and completing this prior to attending the first sessions.

Gorgeous April weather brought the crowds out for a friendly encounter between The Green and Worcester.