The content of this website is intended as an historical record of Barnards Green Cricket Club, important parts of which are the various photographs which may be taken from time to time and displayed on the site or in the clubhouse.

IF ANY MEMBER OF THE CLUB  DOES NOT WISH PHOTOGRAPHS OF THEMSELVES OR THEIR SONS/DAUGHTERS TO BE PUBLISHED, THEN THEY SHOULD CONFIRM THIS IN WRITING TO ANY TEAM CAPTAIN OR TO THE COLTS MANAGER

Colts Win.
A win over Kempsey saw our under 10s deservedly finish top of their league.
and they now progress into the semi final of the under 10s knockout competition.
A brief summary of their season can be found here.

Marek's Marauders back to winning ways.
The Green sunday 2nds entertained top of the table Swindon on Sunday and came out victorious by 5 wickets.
Batting first Swindon got off to a disastrous start losing five early wickets for just 35 with Anschuman finding
a good line and picking up 4 wickets and 15 year old Mike Ellis bowling with good pace,
one, skipper Davies then dug deep and was well supported by Bull as they looked to rebuild the innings.
Despite early wickets the run rate was over 6 until the introduction of Jamie Longmore who bowled a good tight line
conceding just 24 runs off his 8 overs and was unlucky not to pick up wickets.
Sherliker and 15 year old Chris Freeman picked up a wicket a piece and Swindon did well to reach 204 after their 40 overs.
After an excellent tea, Green openers John Sherliker (65) and Dave Bayliss (18) got the Green off to an excellent start
on what was an excellent batting track which has been a feature of the season thanks to Roy Mayo.
When both openers departed Richard Wall (9) and Robin Longmore (22) looked to take the game on,
but Wall was adjudged caught behind and Longmore was joined by Chris Freeman who
worked the ball around well to give Longmore the strike before he was well caught on the deep midwicket boundary.
Anschuman strode to the wicket and took the game by the scruff of the neck striking 11 boundaries in a match winning knock
and when Freeman departed for a well worked 21, skipper Wajzer helped Anschuman to pass the victory target
to earn the Green a well deserved victory by 5 wickets.
Many thanks to match sponsors Malvern Independent Financial Advisors.

Burghill and Tillington returned to Worcester League cricket this season after some time in the Marches League.
At least one of our "veteran" members has prior experience of the Herefordshire side having toured there on
numerous occasions in the 90's. Strange how some people always seem to look the same. Remember this photo
was taken 14 years ago! 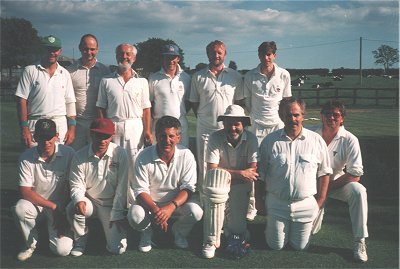 Saturday 31st May.- Clean sweep
It doesn't happen that often but all four of our teams won today - 1sts beating Oldswinford at home,
2nds victorious at Lye and the 3rds and 4ths both recording excellent victories over Martley.

TOUR NEWS
This year's tour will, by popular demand, be to Bolton once again.
The Packhorse Hotel has been booked for 3 nights - 26th, 27th and 28th August.
Fixtures will be posted as soon as they have been confirmed.
The total cost for accommodation, travel, teas and tour shirt should be around £140.
In order to secure your place on tour a deposit of £35 needs to be paid to Paddy or Engine
no later than the 1st July.

Congratulations to the 1st XI on a great winning draw over Eastnor and thanks from the spectators for the entertainment
and thrilling finish. Match report..

Oops!
The Flynn good looks have a bit of a setback after some attention from the England bowlers.

The Green wish Dan Flynn good luck in the second test starting today ( 23rd may ) at Old Trafford.
Following on from his excellent knock of 29 not out Dan gets another go in the pivotal No.6 slot
Best possible situation for all concerned at the end of today's play would be New Zealand all out for 150... D Flynn 100*
Click Here to read about some of Dan's escapades whilst he was with us.

With a view to resurrecting the once popular "quote of the week" slot, click HERE for a taste of some of those
memorable moments. If YOU have a contender for quote of the week then send it in.

COLTS NETS SCHEDULE.
Details of the Colts Coaching sessions can be found HERE.

As some of the the sessions will be running at different times can all coaches, assistants and parent

please make themselves familiar with the agenda this year.

2008 Season starts - Weekend teams will be posted  here throughout the season.

Pre-Season Newsletter
Get yourself up-to-date with what's happening at The Green,

now and in the coming few weeks.