You can have your advert including an active website link in this space.

The 1st and 2nd teams play Redditch this Saturday 12th June, with the 2nds at home - don't forget the early start.

This will be a good test for our 1st team in particular, without an overseas player for a number of weeks and a chance to prove

that our home-grown talent is more than good enough to compete at the highest level.

The 3rds and 4th play Old Vigornians, again with an early start, the 3rds being at Newland and 4ths at Hawford Lodge.

4th team skipper Dick Brown will be anxious to preserve his unbeaten record and secure a win against tough oponents.

The club is all geared up for that other sport - footie - as the World Cup gets under way this Friday.

As well as the big screen and the TVs in the bar and the cricket area, we also we now have another large TV

situated in the main function room and so there is no excuse for not being able to find a spot to celebrate,

(or of course to cry into your beer). The club will be open at all of the right times for the major matches so come

along and support YOUR CLUB as well as England.

Andre Russell - The Green's overseas player this year has had to leave Malvern, at least for the time being as he has been

given the honour of being called up to the West Indies A squad for a series of matches both in this country and abroad.

We wish Andre the very best of luck and look forward to welcoming him back soon.

There is a chance to see West Indies A team on 4th July at the county ground when they take on England Lions. 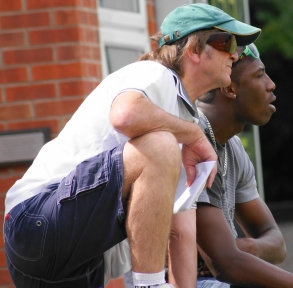 Andre gets some last minute advice from the Cricket Chairman before flying off ... to Cardiff.

second in the table. Andre hit 98 in his final game, (for a while), for The Green and both he and Fordey

each took 4 wickets. The 3rd XI  beat OEs, thanks in part to a fine 64 from Lewis Loader whilst

The fourths secured a creditable winning draw over OEs, with half-centuries for Dick Brown and Chris Horne.

Despite a half-century from Adam Greaves and 4 wickets from James Scullion the 2nds went down against Hagley.

A Dick Brown over 50s XI played The Fossils. St John Ambulance on standby and sales of linament

soared in the Malvern area. 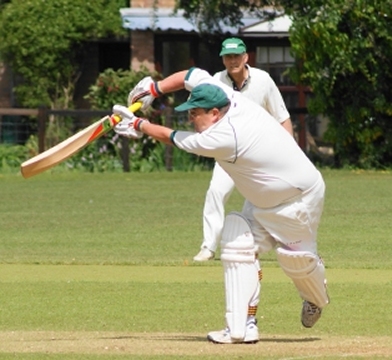 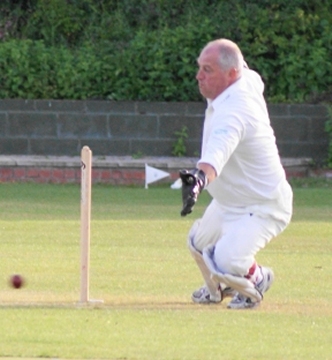 29th May - 1st and 2nds enjoy convincing victories over Colwall whilst the 3rds and 4ths are called off due to rain.

of 4-58 from Lewis Hooper were the highlights for the 2nds.

Bowling out table-topping Bromyard for just 46 runs was a great performance at the weekend. You can

read the full match report and the reports from the other side's games here or by clicking on the link on the left.

remember that if you wish to post your own comments, gosssip, photos etc then you can do so on the forum

A meeting of some of The Green's greatest cricketing minds?

22nd May - Home match for the seconds as our top two teams take on Bromyard,

Thirds and fourths play Harvington with the fourths at Newland.

Remember that you can post your own comments, reports and photos on the forum section of the BGCC website.

You don't need to wait for the Malvern Gazette to come out on Friday.

Friday 21st May - There is a first team knockout competition at The Green, start time 6pm (ish).

players and members present as possible to support both the team and the club.

to be a glorious afternoon for cricket. The seconds travel to Belbroughton

GAME of the season playing Hanley and Upton at Newland.

so far and travel to Hanley Castle.

4ths narrowly miss out on rain affected win over Bromsgrove and settle for losing draw.

All of the season's match reports will appear on the website as they are received.

if you want them to appear on the main website.

other match was abandoned. Match reports appear on the website as soon as they are received and remember that

OUTDOOR NETS for age groups under 13s and below have started.
All registered coaches and assistants are kindly asked to attend from 6.15 pm on Wednesday evenings. 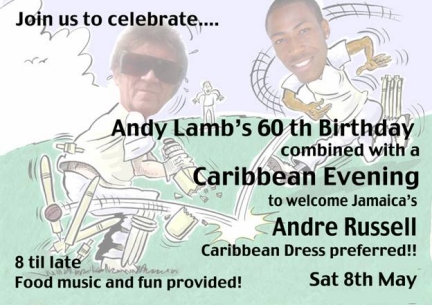 Jack Attack was unleashed as Andy Wheeler carved his way to a fine 75.

Mettie, Greavsie and Ratters all chipped in with valuable runs whilst, for the bowlers,

The Green successfully chased down 242 to win. 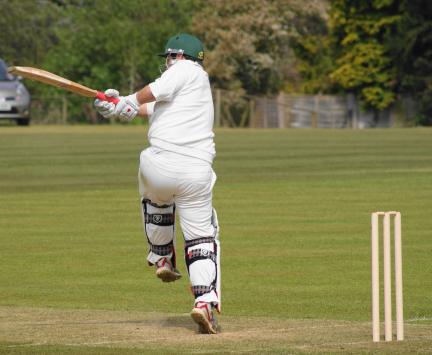 In the reverse fixture Andre Russell hit one

of the biggest sixes seen at Northend Lane

for several years as he opened his Green debut

with a fine 68 and then followed this up by bowling

4 consecutive maidens before retiring with jet-lag.

A good crowd watched the 2nds beat OEs in the first friendly of the season. 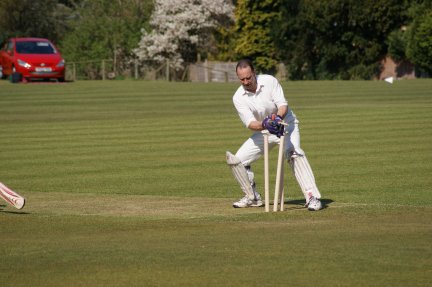 IT'S TIME FOR CRICKET !

At last, after what was surely one of the longest and most boring winters in the memory

of most of our players and members, spring is here, the weather is fine, at least for now

and it's the cricket season.

at Northend Lane whilst the 1st XI travel over to Perdiswell for the reverse fixture.

No doubt the critics bench will be filled with experts anxious to assess the talent on display.

not come along and enjoy yourself.

Hatherley and Reddings and our overseas player for

the season will be in action,  (volcanic ash and plagues

of locust permitting of course).

each wednesday evening from 6.30pm till 8pm weather permitting. Burgers etc will be available after each session.

A full season of fixtures has been arranged and further details can be found on the Colts section of the website.

This promises to be a ridiculous amount of fun and you can even win a substantial cash prize, so why not join in?

Click here to see the rules and regulations, as well as a list of the rather dodgy players who you can select to be in your fantasy team.

Any specific questions should go to Tim Williams or Fordy but we will of course pass them on for you if it's easier.

The Spring Newsletter is now available and for those not on the email distribution list a copy can be downloaded here.

As a precursor to the 2010 Cricket Season Barnards Green C.C hosted a sportsmen’s evening.

and an excellent meal of pie and mash  was prepared and served by The Green's catering team.

of other forthcoming prestigious events.

Congratulations to Tony Creese - Winner of the MCCC Cricketer of the year (administrative) Award for 2009.

Tony will receive this prestigious MCCC award at a dinner Edgbaston shortly.

For those of you not aware of Tony's "chequered" past he has been an integral part of our club for the past 50 years.

He has been not only a player but Captain, Chairman, Secretary, Colts Coach, Groundsman and he has done

just about everything asked of him and usually more.Tony is currently retired but spends the majority of his days

at the club doing something or other for the benefit of the club and its members for no reward.

He still sits on the clubs management committee. Well done Tony - and thanks from everyone.

Please make sure that you register as soon as possible. The Forum is the place for you to have your

say, whether it be about serious cricket stuff or just for fun.

of your tie(s) then please leave a cheque, payable to Barnards Green Cricket Club, for the appropriate amount,

behind the bar at the club in an envelope marked "club tie". Please then email us here to confirm your order and

whether you have paid. You will either be able to pick up your tie straightaway or we will let you know when

it is available. Any questions then please ask.

An original painting of the Northend Lane ground was specially commissioned for the 75th anniversary year.